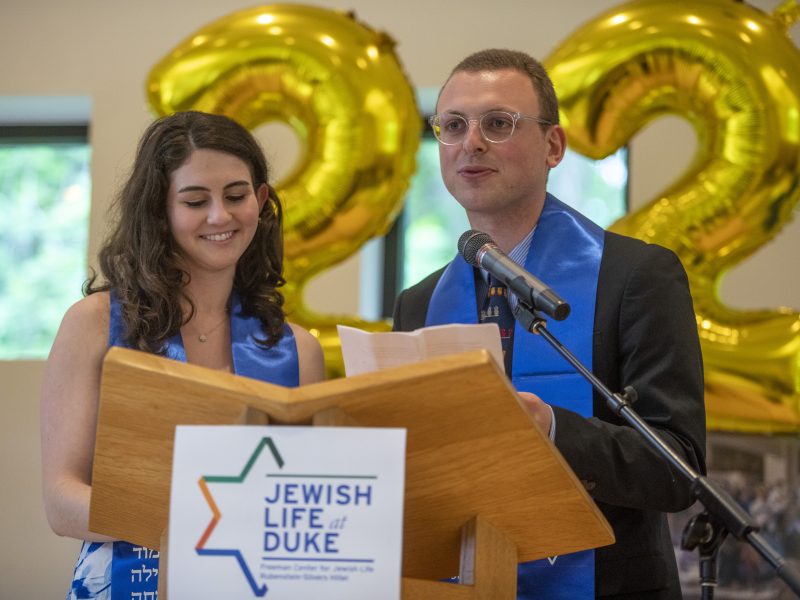 From Walk-Out to Celebration

“Jewish students today shouldn’t take for granted a wonderful event in their collegiate lives for which my classmates and I had to fight.”

-Rob Satloff, T ’83, One of the Organizers of the first Jewish Baccalaureate at Duke

The first Jewish Baccalaureate at Duke started as a walk-out protest by a handful of Duke seniors in 1983. Forty years later, it has since transformed into an annual ceremony to recognize and celebrate the contribution of graduating students to Duke’s Jewish community, taking place in the home for Jewish Life at Duke, the Freeman Center.

A baccalaureate service is a celebration that honors a graduating class. Historically, baccalaureate services at Duke were Christian in nature. Esteemed Duke alumn, Rob Satloff (T ’83) was one of the original organizers of Duke’s first Jewish Baccalaureate. Satloff shared in a past interview his perspective on that first walk-out, in the Spring of 1983:

“The previous May, I had attended the university baccalaureate service and was shocked that it included specific prayers consecrating every student’s education in the name of Jesus Christ. Like all Dukies, I knew of and respected Duke’s Methodist origins and connections, but I also knew Duke to be a place that celebrated, thrived, even boasted about its diversity. I could not fathom that it would require all students who wanted to enjoy the grandeur and fullness of their graduation weekend to pay homage to Jesus, regardless of their faith (or lack thereof).

So, I wrote an op-ed for The Chronicle that outlined the problem and proposed two alternatives: either re-name the Chapel event as the Christian baccalaureate service or make the service more universal and ecumenical by encouraging members of all faiths to share equally in the celebration. “Graduation is an event that happens only once,” I wrote. “Why shouldn’t my family be permitted to enjoy it, too?”

I remember the op-ed caused quite a storm, prompting numerous supportive notes from Jewish and non-Jewish classmates alike. But the University administration was not amused. Its response was a firm “no.”

The battle was now joined. Rabbi Fischer continually reminded me of the importance of being constructive, not destructive. After all, I had no desire to tarnish Duke’s graduation festivities, just to expand them to be truly inclusive of all Duke graduates. Together, we devised a plan.

On the day of the baccalaureate service, I joined hundreds of other graduates and our families in the wondrous surroundings of Duke Chapel. A few of us promised each other that at the moment we were asked to consecrate our education to Jesus, we would all stand and silently walk out. We also promised each other that we would have our families join in. I had images of a vast parade marching down the center aisle of the Chapel in a powerful, yet respectful statement of protest.

In the end, we never quite achieved “vast parade” status. When the moment came, I stood up with my family as well as a couple of friends and their families, then we made our way to the aisle and marched out of the Chapel into the brilliant sunlight. The size of the procession didn’t matter. It was an exhilarating moment.

Later that afternoon, or was it the following day, I don’t recall, in a mid-sized lecture room on East Campus, Rabbi Fischer officiated at what Allen Building termed the “Jewish graduation ceremony,” but what everyone at the lively and festive event called Duke’s first-ever Jewish Baccalaureate Service. I recall having had the privilege of telling everyone the story of how we got there.

Over time, the University realized it was wiser to embrace our “protest baccalaureate” rather than fight it. But Jewish students today shouldn’t take for granted a wonderful event in their collegiate lives for which my classmates and I had to fight. When I see that the Jewish Baccalaureate Service has gone from a being a renegade event to a celebrated moment on the university’s graduation calendar, nothing made me prouder of being Jewish at Duke than my role in making that a reality.”

Jewish Life at Duke is excited to host the 40th Annual Jewish Baccalaureate ceremony for graduating Jewish seniors and their families at the Freeman Center this spring. Remarks by Jewish Life at Duke leadership and students, a keynote speech, blessings, and presentation of gifts are included. As our graduates prepare to embark on their next chapter, we look forward to celebrating their time at Duke and their many contributions to our Jewish community.

The Freeman Center for Jewish Life, located on Duke’s campus, opened in 1999, providing a home for Jewish Life at Duke and the Rubenstein-Silvers Hillel and for…

Whether you're staying on campus / in Durham over the winter break or headed elsewhere, remember there are still resources available to you, wherever you…

Dr. Robert Satloff  (T’83) is one of America’s foremost experts on Arab and Islamic politics and U.S. Middle East policy.  Since 1993, he has served…