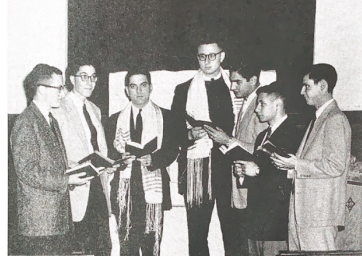 The Freeman Center for Jewish Life, located on Duke’s campus, opened in 1999, providing a home for Jewish Life at Duke and the Rubenstein-Silvers Hillel and for the Duke Jewish community to gather, celebrate, learn, and pray together. As you’ve read in our history, though, you know that Jewish student centers, and Jewish communities especially, existed on campus long before the Freeman Center was built.

What was Jewish life at Duke like in the 1950s?

Class of 1958 alumna Charlene Nachman Waldman shared the following photos and reflection with us:

Jewish students at Duke in the 1950s would not have imagined that one day there would be a Freeman Center for Jewish Life providing religious services, great food, holiday celebrations, educational programs, trips and other wonderful opportunities.

But there was Jewish life! Students led Shabbat services every Friday evening in a room in the Divinity School. A special banner covered a cross in the room.

Every two months Hillel sponsored a bagel breakfast. My cousin Charles (Chick) Becker ’56 remembers ordering the food from a deli in Baltimore and picking the food up at the Durham bus station. Rabbi Efe Rosenzweig, the rabbi for North Carolina Hillel, attended the bagel breakfasts.

Jewish students engaged with the Durham Jewish community in many ways. Students were welcome at Beth El Synagogue for the High Holidays. I remember attending a Yom Kippur breakfast at the rabbi’s home.

The Evans family in Durham were very hospitable to Jewish students. Mutt Evans was mayor of Durham for many years and his wife Sarah was very active in regional and national Jewish activities. They invited Jewish students to their home for celebrations of holidays and special occasions such as graduation. Their youngest son Eli (Sonny) was in same class at UNC as I was at Duke. Later, he wrote several books about the Southern Jewish experience.

The fraternities ZBT and AEPi and the sorority AEPhi were important aspects of Jewish life.

In the broader community, Jewish students were leaders in many ways. Nolan Rogers ’53 was student body president in the academic year 1952-1953 and was captain of the Duke lacrosse team. Mike Temko ’58 was president of the Inter Fraternity Council and Sally Kraus ’58 led the Women’s Panhellenic Council.

Duke students are very lucky to have The Freeman Center and we were also lucky for the Jewish life we experienced at Duke.

We recognize that this piece, which reflects the experience of a Jewish alumna in 1950s Duke, does not reflect the entirety of the Duke Jewish experience in that era. The Jewish community has a history of having been both included and excluded in the University during that time, facing discriminatory barriers to admission and education. We encourage readers to learn more about the obstacles Jewish students, faculty, and staff faced in this online exhibit, “Down Home: Jewish Life in North Carolina,” curated by Duke’s Center for Jewish Studies and the Jewish Heritage Foundation of NC.

Acknowledging this history of the University is essential to both recognizing the substantial progress made and to continuing to work toward an inclusive environment free of antisemitism.

The 1950s Duke Jewish Alumni Reunion took place November 5-7, 2010. Ted Taub (deceased), Charles (Chick) Becker, ’56 and Charlene Nachman Waldman ’58 organized the Reunion. With assistance from the University, they contacted undergraduate and graduate Jewish alumni from the 1950’s. Twenty alumni, spouses and other family members from the U.S. and Thailand attended. The organizers created a booklet with names, addresses and “Life After Duke” messages from the attendees.

The Reunion began on Friday with a welcome reception in the Reunion hospitality suite at The Hilton Hotel. That evening, Jewish Life at Duke hosted the alumni for Shabbat services and dinner at the Freeman Center for Jewish Life. Alumni had the honor of lighting the Shabbat candles and experiencing the contemporary community among Duke Jewish students. During the dinner, Chick Becker spoke to the students about Jewish life at Duke during the 1950s.

On Saturday, the group cheered the Duke football team against UVA. Prior to the game they enjoyed a great tailgate lunch. Duke won the game! On Saturday night there was a festive dinner at The Wahington Duke. A photo display during the dinner displayed the fraternities ZBT and TEP, the sorority AEPhi and Hillel activities including Shabbat services in a room at the Duke Chapel and bagel brunches. There were also photos of Jewish students in leadership roles such as Interfraternity Council, the PanHel Council, and student government.

During dinner, many alumni spoke about their Duke memories and how happy they were to reconnect with old friends and make new friends.

The Reunion was a very unique and special time for everyone who attended.

Chick, Charlene, and Alan Markoff attempted to organize a second Reunion in 2015 but the group did not gather at that time due to challenges in logistics and communication.

Photos and text courtesy of Charlene Nachman Waldman ’58. Special thanks to Charlene and to Sydney Albert ’22 for assistance with this project preserving and publishing the history of Jewish life at Duke.

Don’t Let the Light Go Out

Jewish Life at Duke has been enriched this year by the addition of two hand-crafted chanukyiot...

Dr. Robert Satloff  (T’83) is one of America’s foremost experts on Arab and Islamic politics and U.S. Middle East policy.  Since 1993, he has served…