Serving, supporting, and challenging our students is what we do. 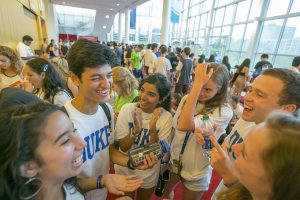 Today and in the future, Student Affairs will work closely with students to enhance leadership opportunities, promote interaction and familiarity among diverse racial, ethnic, international and political perspectives, support healthy habits and lifestyles, and provide outstanding career counseling and post-graduate opportunities. We will also encourage community and environmental involvement, whether with one of the hundreds of student organizations on campus, out in the Durham community, or anywhere in the world their passions lead.

We are grateful for your support and want giving to Duke and Student Affairs to be convenient and easy for you. You can support Duke and the initiatives that are important to you in various ways. Non-monetary gifts are possible and appreciated.

The Career Services Initiative promotes awareness that students must develop ways to be adaptable, diversified and efficient to maintain the Duke competitive edge in a dynamic and increasingly complex world. Career support at Duke will be based on an eight-year relationship spanning the first year to four years after graduation. Through this innovative model of career guidance, we intend to be the key career support partner at the critical juncture when young alumni face transitions that include the option of changing jobs or careers, obtaining a graduate degree or exploring a variety of alternatives.

Make a gift to the Career Services Initiative

The Diversity Initiative recognizes that we live in a world where difference is the norm. Duke is a truly global university with students, faculty and staff reflective of the remarkable diversity of race, ethnicity, culture, religion, sexuality and ancestry in the United States and throughout the world. We are committed to exposing students to and engaging them in the spirit and practice of multiculturalism and inclusion so that we may prepare them for their future in this ever-changing landscape of people, places and ideas. Through our efforts, we will promote cultural diversity through collaborative student-initiated events, faculty and staff led dialogue, social interaction and experiential learning.

Make a gift to the Diversity Initiative

The Leadership Initiative is designed to provide opportunities for students to grow as leaders and to develop the skills and confidence to take on leadership roles while at Duke and beyond.   Through partnerships with Fuqua's Center on Leadership and Ethics (COLE) and the Hart Leadership Program (HLP) in the Sanford Institute of Public Policy, Student Affairs will transform leadership education, enhance the education of ethical leaders and bridge the gap between theory and practice.

Make a gift to the Leadership Initiative

The Student Involvement Initiatives is at the foundation for student programming and leadership exploration. This initiative will provide for continued opportunities to fund speakers, performers and presenters, to sponsor competitions, to showcase student talents and to ensure a lively and robust campus life. Knowledge gained and skills honed through staff and student initiated programming will provide opportunities for students to exceed as on-campus leaders and as exemplars after graduation.

Make a gift to the Student Involvement Initiative

The Wellness Initiative recognizes that academic success is related to good health, and that good physical and mental health habits developed during the undergraduate experience will contribute to a more balanced, purposeful and gratifying life in the years beyond Duke. Gifts to the Wellness Initiative will enable the Student Health Center, Counseling and Psychological Services and the Center for Alcohol and Substance Abuse Prevention to enhance the everyday lives of Duke students.

Make a gift to the Wellness Initiative

The Griffith Endowment has been a staple funding source for the Division of Student Affairs to support numerous and varied student groups and activities throughout campus.

The William J. and Carol T. Griffith Endowment was established in 1991 by friends and students of the Griffiths in recognition of their loyal support for Duke. Over the past 18 years, the endowment has supported countless student activities, from service projects, the Community Service Center to the Arts Theme House. Funds from the endowment were also granted to the Center for Race Relations in their efforts to harbor meaningful interactions among different racial and ethnic groups on campus. A grant was given to the International Association to fund Springternational, an annual event held to increase cultural awareness through art, cuisine and presentations. Other programs and groups that have benefited from the endowment include Duke Out, the Graduate and Professional Women's Network and the GPSC Basketball Campout.

The Griffith's support of numerous student groups is only a fraction of their contribution to the University. Their commitment to the growth of the student community has touched Duke students over many generations and will continue to do so in the years to come.

Ben Ward was a soft-spoken man of tremendous depth of talent and achievement who spent his life at Duke in the service of others. His passions of music, philosophy, the nature of sports, the residential and intellectual life of students, and the homeless were where he spent his time and energies. He did not just have talents and achievements, he actively used them for the betterment of others. During his tenure at Duke, Ben served in the office of residential life as well as being a Professor of Philosophy. True to his nature, he lived in a faculty apartment on campus, so he could more easily interact with students and foster an interest in music.

The Pitchforks is an a cappella singing group that formed a year before Ben's arrival at Duke in 1980. He was recruited to be the faculty advisor after arriving on campus, and soon thereafter began singing with the group, arranging music, and often serving as its director. He was a member of the group for over 30 years.

Alumni of the Pitchforks decided to create the Benjamin F. Ward Arts Endowment to help continue Ben's mission of integrating the Arts into the residential life at Duke. After a multi-year effort, the continuing endowment was funded, thanks to the donations of current and alumni Pitchforks as well as many of those who have been blessed to know Ben and his mission for others.

As the endowment continues to grow, it will make an increasing and ongoing impact on the lives of students within their residential setting.

Jewish Life at Duke serves as home away from home for students. We are guided by a mission to empower Jewish students to learn and grow intellectually and spiritually; to inspire and nurture personal paths to Jewish identity; and to cultivate community and friendship. We pride ourselves on providing a welcoming community for students to explore their identity, celebrate their culture, and engage with Judaism in a real and tangible way. 100% of JLD's operating budget comes from donations from alumni, parents, and friends.

We provide a welcoming environment for students to engage with Islam in spiritual, social, and intellectual ways. The Center for Muslim Life serves as a home away from home for all who want to engage with Muslim community at Duke. At the CML, students, staff, and faculty come together to create a vibrant and inclusive Muslim environment. We invite you to come check us out: watch a movie on our flat-screen TV, play games from our collection, host a study group, or join us for some of our scheduled programming. Our doors are always open!